Icelandic artist Ragnar Kjartansson combines performance, music and video in works that probe the tragic and comic sides of human existence. In his first major Canadian exhibition, featuring four important pieces, viewers will discover a spectacular universe tinged with both melancholy and humour.

Icelandic artist Ragnar Kjartansson combines live performance with music to create manifestly romantic environments. He probes the tragicomic aspects of life in which sadness collides with happiness, horror with beauty, and drama with humour; he plays with themes from art history—the painter and model, the sacred space of the artist’s studio—which he then deconstructs by opening his studio to the public.

Kjartansson stages performances that are melancholic, but also contain comical and absurd moments in which he exaggerates the poses and attitudes of a diverse set of images of the artist. In his performances, which may stretch over weeks or even months, he studies not only his own physical and psychological limits, in the tradition of early performance art, but also the status of the artist and its multiple representations.

This exhibition is Ragnar Kjartansson’s first major show in Canada. It will present a corpus of three significant works, all representative of his explorations in performance, which draw from a broad spectrum of the arts (from theatre to music, sculpture and the visual arts) as he tries to untangle the myths of contemporary culture while walking a thin line between mysticism and parody.

The works include the video installation The Visitors (2012), an impressive nine-channel projection on a 1:1 scale. It shows musicians who are Kjartansson’s friends and acquaintances (including Kristín Anna and Gyða Valtýsdóttir, sisters who were founding members of the legendary Icelandic group Múm, as well as Kjartan Sveinsson, keyboard player with the band Sigur Rós until 2012); for nearly an hour, they interpret the melody of a song through various instruments and voice. Called Feminine Ways, the music was composed by the artist and the lyrics are a poem written by Ásdís Sif Gunnarsdóttir, Kjartansson’s former partner. Presented collectively, the individual sound pieces create a powerful but subtle contrast and the viewer is positioned in the very middle of a continuous choral performance.

There is also the video A Lot of Sorrow (2013), recently acquired by the Musée, which is the result of a collaboration with the U.S. band The National. The video is of a performance organized by MoMA PS1, arranged by Kjartansson, in which the group performed their song Sorrow for 6 hours straight, or 105 times.

Exhibition presented with support from Esker Foundation, Calgary; and Icelandair.

Ragnar Kjartansson was born in Reykjavik, Iceland in 1976. He studied at the Iceland Academy of Arts and the Royal Swedish Academy in Stockholm. His works have been shown in museums and institutions around the world, including the Arthouse at the Jones Center in Austin (2011), the Institute of Contemporary Art in Boston (2012) and the Hangar Bicocca in Milan (2013). Recently, the Thyssen-Bornemisza Art Contemporary in Vienna (2013 and 2014) and the New Museum in New York (2014) presented solo shows of Kjartansson’s works. In 2009, Kjartansson represented Iceland at the Venice Biennale, and in 2011 he received the Malcolm McLaren Award at Performa 13 in New York.

Ragnar Kjartansson at the MAC

Ragnar Kjartansson and Friends, World Light – The Life and Death of an Artist, 2015 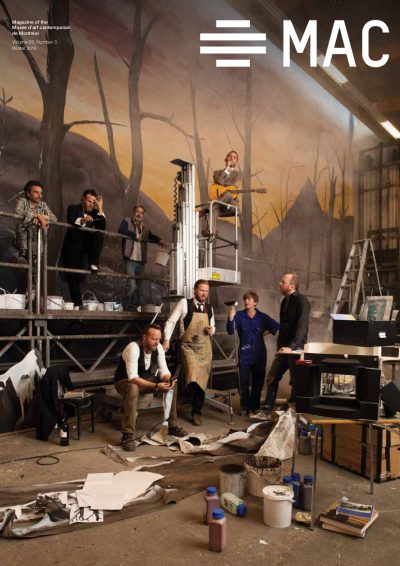