As part of the 2nd edition of BIAN, the Musée d’art contemporain is pleased to present C4I, a work by Ryoji Ikeda, one of the foremost names in minimalist electronic music.

Ryoji Ikeda’s practice explores the rationality, simplicity and intricacy of ultrasounds, frequencies and the essential characteristics of sound. A master of minimalist sound, Ryoji Ikeda takes the manipulation of sonic data to the limits of perception. In his work, the sublime blends with infinity, and the nexus of sensations triggered by his visual and sonic compositions evokes a vast, intangible and strikingly elegant world.

Ryoji Ikeda is a foremost figure in the field of minimalist electronic music. Born in 1966 in Gifu, Japan, he now lives and works in Paris. Ikeda, who is a member of the multidisciplinary artists’ collective Dumb Type, first attracted attention with his recordings, concerts and installations in the mid-1990s, as part of the electronica scene. In 2001 his work matrix earned him the Golden Nica at the Ars Electronica festival in Linz, Austria, and he was shortlisted for the Worldwide Technology award in 2003 and 2010. He works regularly with Carsten Nicolai on the collaborative project cyclo, the choreographer William Forsythe of the Frankfurt Ballet, the artist Hiroshi Sugimoto and the architect Toyo Ito. Ikeda’s first major solo exhibition was held in 2009 at the Museum of Contemporary Art in Tokyo. In 2011 Park Avenue Armory commissioned the work Test Pattern. In 2012, at the instigation of John Zeppetelli, DHC/ART Foundation for Contemporary Art presented Ikeda’s first monographic exhibition in North America. Ryoji Ikeda is the award winner of the Prix Ars Electronica 2014.

C4I uses data as material and theme, highlighting the ways in which such information shapes our understanding of the world. Video images of landscapes are progressively abstracted into a language of data, while facts, figures and diagrams are used in montage with dazzling graphic force. Text excerpts elegantly punctuate the on-screen projections. Blurring the lines between nature, science and philosophy, the work subtly suggests a convergence of the real and the virtual. The soundtrack synchronizes perfectly with the graphical and video images to create a piece of undeniable power and beauty. In this highly atmospheric work, Ikeda strives for an aesthetic of pure data. Derived from the natural world and from global systems such as economics and theoretical mathematics, data represents a new material for the artist’s explorations. C4I, in its meticulous composition and technical sophistication, reveals sublime views of reality. 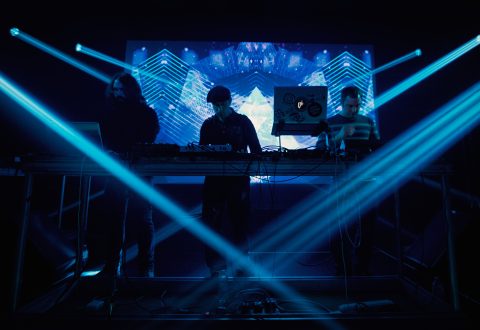