Dust was written for percussionists Dirk Rothbrust and Christian Dierstein of Ensemble Musikfabrik. The piece reveals a strikingly unfamiliar sonic world that is separated into eight modules, which can be performed in any order to create a personal and unique presentation. This evening, I’ll be performing only three of the modules: crystal, triangles, and cadenza.

The text at the beginning of Saunders’s score provides some clues to the significance and origin of the title:

dust / dʌst / n.: a fine, dry powder of tiny particles of waste matter or earth.
A film of dust is a like a membrane, covering or layering the body or thing, on the ground, on surfaces or carried in the air. The dust of the earth is a place of burial.
Dust within a room is composed mostly of dead skin, a powder of mortal remains.

The definition and the Beckett quotation imply a strong association of dust with death. However, the sonic association that immediately emerges when hearing the piece is the abundance of buzzing from snare drums, which will be heard in the three movements I will present tonight. Among other materials used in the piece, such as aluminum foil on bell plates and small chains on the base drum, the grainy texture of the snares is the closest connection I can make with the word dust, and, ironically, the “dust” of the snares and the foil are used primarily to extend the resonance that comes from other instruments, such as singing bowls and aluminum rods.

Whereas triangle and crystal are improvisations defined by their instrumentation, cadenza is a special module that allows each performer to utilize their own special collection of instruments. For this module, I’ll be using a bowed aluminum wand, other resonant metals from my own collection, and a special “overtone triangle,” an invention of the late percussionist and composer Mathias Kaul, which consists of a Styrofoam hemisphere that amplifies select frequencies emitted by the triangle.

For those who would like to hear the whole piece, I’ll be performing Dust in its entirety on March 22, 2023 at Ausgang Plaza, in a concert presented by Code d’Accès.

In Bone Alphabet, Ferneyhough presents a nearly impossible puzzle to the percussionist: assemble a collection of seven instruments from low to high pitch with a similar dynamic range and a relatively fast decay. However, no two adjacent instruments can be of the same material. If the lowest instrument is a skin, for example, the next one cannot be a skin, but must be wood, metal, glass, or another material.

This one simple rule is part of what makes Bone Alphabet such a challenging work to perform, but it is also what gives it its distinctive sound. Although the level of pitch is ordered from low to high, the atomized organization of the instruments makes it nearly impossible to distinguish the polyphonic lines that move throughout the piece. This organization functions to destabilize the written music, which gives agency to the materials themselves, resulting in a chimeric musical organism. The tension between the complex polyphonic lines and the arrangement of the instruments produces novel expressive gestures that could not emerge simply through improvisation. Through this process, Ferneyhough’s work yields a rich expressive vocabulary from what is a relatively limited collection of found objects.

From low to high, my instrumentation consists of a low floor tom, a large metal bell, a bongo, a large piece of ceramic, wood, a glass Gerolsteiner bottle half-filled with water, and a small shard of ceramic.

This is one of the pieces in a series of “composed improvisations” in which Cage offers materials with which performers can create their own score if they follow his instructions to perform chance operations by pulling pieces of paper out of a hat (an idea that came originally from Marcel Duchamp with his piece Erratum Musical). Written on the pieces of paper are numbers that correspond to durations, beaters, number of ictuses, and any other additional variable that the performer may think of.

The most interesting variable for me in this piece is the selection of beaters. Chance operations determine two out of eight possible beaters for any given event in the piece, but the eight beaters to be chosen from are left entirely up to the performer. I decided to choose beaters for the purpose of producing exclusively friction sounds on the drum, as a way of radically shifting the sound world away from typical percussive sounds. By preparing the drum with beeswax and rosin, it is possible to achieve a wide variety of long tones very rich in harmonics through the use of wooden reeds, springs, Styrofoam, bouncy balls, threaded rods, and other objects. The process of exploring these possibilities led me to use a floor tom instead of a snare drum, as it yields a richer response to frictional treatment.

The title Psappha is derived from the name Sappho. Sappho was a Greek poet from the Island of Lesbos, who was widely regarded as one of the greatest lyric poets during the sixth century BCE. Much of her poetry is lost, but Xenakis used metric patterns from the known fragments to compose much of the rhythmic structure of the piece. Although it is not confirmed, it is possible that the middle section of the piece, which features long silences punctuated by the bass drum and woodblock, corresponds to a section where much of the poetry has been lost.

In addition to the rhythm from Sappho’s poetry, Xenakis employed sieves, a type of algorithm, to distribute those rhythmic patterns. Xenakis had used sieve theory to construct unconventional and disjunct scale patterns that could span multiple octaves in other pieces, but in Psappha it is used strictly to organize rhythm. With simple sieves, one sound may occur at one steady periodicity while one or more sounds occur at another, resulting in a complex polyrhythm or basic pattern that cannot be subdivided evenly by metered bars. Xenakis used the visual metaphor of a gearwheel to represent this concept, which is found in his sketches from when he was composing Psappha: 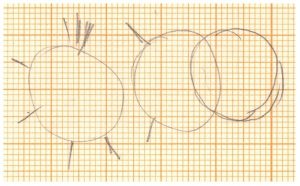 Xenakis’ drawings of gearwheels in his sketches for Psappha.

Although the rhythmic values are strictly determined in Psappha, the instrumentation remains open. Xenakis organizes instruments by register and material, with groups A to C being skin or wood instruments, and D to F being metal. Apart from group E, which contains a single non-pitched or “neutral” sound, each group contains three instruments arranged by pitch from low to high. The choice of instrumentation thus becomes a significant factor in the interpretation of Psappha.

There are couple of details in Psappha that demand some innovation from the performer, and these are sometimes overlooked. The first is the fast tremolos that occur between the wood, skin, and metal instruments at the end. Some players have devised the solution of hanging duplicate instruments upside down so that one instrument can be hit on the downstroke and one on the upstroke. Not wanting to build too complicated a set-up for the piece, I’ve devised a simple solution using extra wood and metal instruments that I play with four mallets instead of two. The second detail involves the gradual glissando in group B that occurs near the beginning of the piece. Group B, which is almost always played on skins, is supposed to gradually descend in pitch until it reaches the lowest drum of group C (typically a large bass drum). It is difficult to come up with an elegant solution for this, but I’m attempting to use muted roto toms to achieve the desired effect. The overall idea is to feel that group B (for me, two bongos and one conga) is gradually decreasing in pitch and increasing in resonance, slowly transforming into group C (two floor toms and a resonant pedal bass drum).