For his first solo exhibition at the Musée, Castonguay has produced a new interactive installation titled Elements, a work composed of recycled and altered projection devices. The circular, blurred images they produce simulate natural phenomena, such as shimmering, silting and rippling effects. Scattered over the floor, the devices project digital images on the wall, which change according to the visitors’ action or even inaction.

Picking up from his earlier media artworks Digital, 2003-2004 (Pierre-François Ouellette art contemporain) and Generic, 1999 (Glendon Gallery, Toronto), here Castonguay engages visitors’ participation and elicits a critical consideration on the use of technological tools in our social environment and, in particular—as is noted by the curator, Sandra Grant Marchand—“on appropriating and experimenting with modes of interactivity by both artists and the public.”

For the past 10 years or so, Alexandre Castonguay has produced a multidisciplinary body of work centred around digital photography, video, computerized installation and the Internet. A native of the Outaouais region, where he lives and works, Castonguay teaches in the Department of Visual Arts at the University of Ottawa. He is also a founding member and the artistic director of Artengine, a website run by and for visual and media artists. A politically committed artist, he contributes to developing the field of free software. He has participated in numerous solo and group exhibitions in Québec, across Canada and abroad, notably in New York, Los Angeles, Santiago and Mexico City. In 2004, he won the Graff Award instituted in memory of Pierre Ayot.

The installation Elements was produced in collaboration with Mathieu Bouchard, programmer. 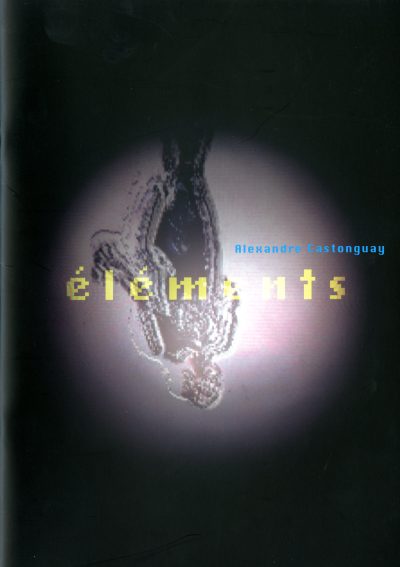