In this new instalment of Pictures for an Exhibition, four Canadian artists belonging to the same generation are brought together around a simple yet complex phrase : Alone together. Solitude being supreme in our core being, how does it express itself in an era of unparallelled connectivity?

In this new exhibit showing works from the collection, Sarah Anne Johnson revisits a music festival and creates a photographic record of these modern-day Dionysian celebrations, collective rituals where social intoxicated freedom replaces social norms. The scenes that compose Field Trip combine euphoria and psychedelia. The ephemeral quality of individual experience reveals the futility of the utopia sought by the community of festival goers.

Graeme Patterson examines the vagaries of male friendship, and the passage to adulthood as the transition from the collective state of childhood to the solitary state characterizing maturity. Player Piano Waltz is a sculpture and video installation composed of a scale model of a1920s hotel and bar perched atop a mechanical piano. The building takes on life when a visitor feeds a coin into the piano. Animated movies are projected in the building’s rooms, to the sound of melancholy music composed by the artist. The protagonists’ interactions peter out until they find themselves alone together in a nameless bar.

Jon Rafman takes a lucid and caustic look at digital technology and new media. Visitors are invited to watch the film Erysichthon while isolated in a glass box, exposing themselves to the gaze of passersby. Through this experience, the work demonstrates technology’s hold on modern consciousness while taking a nostalgic and ironic look at social conventions as well as our virtual communities and their disconcerting realities.

In his series of photographs titled Towards Universal Pattern Recognition, Jeremy Shaw crystallizes, using images characterized by their strong materiality, the concept of rapture. The artist uses archival photographs showing communities of individuals having transcendental and mystic experiences, especially during religious events. He traps these documentary images inside prisms, focusing on the area where the heart of the transcendental experience lies, like a vanishing point. The kaleidoscopic effect and image distortion explicitly illustrate a state of rapture that opens the way to parallel and multiple realities.

How does the way we use new technologies and public spaces, attend great political and religious gatherings and partake of festive events redefine our individuality, intimacy and interiority? Each in their own way, Sarah Anne Johnson, Jeremy Shaw, Jon Rafman and Graeme Patterson reflect on the paradoxes of our society and the concept of community. 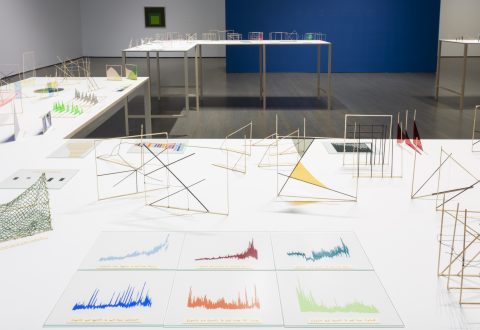