The video installation Citizens Band (2012) offers a subtle, poignant portrait of the musical culture of four immigrants: two in Australia and two in France. Filmed by an attentive camera, the performances of a Cameroonian, an Algerian, a Mongolian and a Sudanese capture our attention with their dignity and the uncommon richness of the faraway worlds they bring us. One after the other, they introduce us to: a traditional technique of water drumming performed by women, songs that have come out of rai music, throat singing accompanied by horse-head fiddle and a demonstration of a great whistling tradition – all executed in various ordinary public places, from a public swimming pool and the Paris metro to the streets of Australia. Citizens Band is an ode to those who, even in exile, manage not only to keep up their connection with their culture, but also to share it with others.

The video projection Prepared Piano for Movers (Haussmann) (2012) shows two movers, loaded down with a piano, making their way up a spiral staircase in a Parisian apartment building. Quite unexpectedly, the two men are making avant-garde music, since the instrument has been “prepared” in the manner of composer John Cage, with objects hammering the strings so that the movements of the piano, as it is slowly lifted, produce dissonant and percussive sounds. Projected vertically, the video emphasizes the piano’s perilous climb, while its improvised, unpredictable music is analogous to the laborious efforts of the men as they proceed. Mesiti’s work highlights the grace and invention of everyday working life. 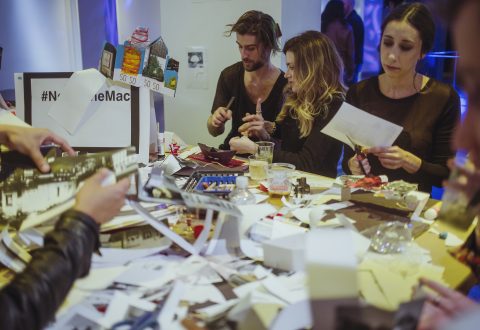