John Akomfrah’s three-channel video installation Vertigo Sea (2015) is at once devastatingly beautiful, heart-wrenching and incredibly timely. Composed of excerpts from films and television programs drawn primarily from the archives of the BBC natural history unit, along with staged footage shot by Akomfrah, it weaves together multiple narratives that portray the ocean as a site of terror and of beauty.

Vertigo Sea juxtaposes powerful scenes of the whale hunt off the shores of Newfoundland; polar bear hunting on Arctic ice flows; kilometre-long schools of fish and plankton; views of the predatory instincts of all forms of marine life; but also black bodies aligned in the hold of a slave ship; Vietnamese boat people fleeing their country; political prisoners being cast into the sea; and the all too common sight of refugees floating in makeshift vessels. Many of these images are familiar to us, we can identify their historical and geographical references, we recognize the stories behind them. And yet, their proximity one to the other with no apparent correspondence across three screens, and over the 48 minutes the work runs, produces a vertiginous effect.

The fictional tableaux that intersperse the work “animate” Akomfrah’s conception of Romanticism, both as an art movement and as a philosophical treatise. The artist directly references the seascapes of J.M.W. Turner, Théodore Géricault’s The Raft of the Medusa (1818–1819) and the sublime landscapes of Caspar David Friedrich, while fragments of texts from Ralph Waldo Emerson, Herman Melville’s Moby Dick (1851), Virginia Woolf’s The Waves (1931) and Heathcote Williams’ poem Whale Nation (1988) function as intertitles.  Further, Akomfrah tells the incredible story of Olaudah Equiano (about 1745–1797), a freed slave from the Kingdom of Benin, who became a British abolitionist, sea merchant and Arctic explorer.

In this complex and highly compelling video installation, the sea is the theatre where multiple (hi)stories come together. The artist deliberately and explicitly implicates the viewer, not only in our collective responsibilities, but also in the creation of new meanings.

John Akomfrah was born in Accra, Ghana in 1957, and lives and works in London. He is an artist and filmmaker whose works are characterized by their investigations into memory, postcolonialism, temporality and aesthetics, and often explore the experiences of migrant diasporas globally. Akomfrah co-founded the influential Black Audio Film Collective in London in 1982, alongside the artists David Lawson and Lina Gopaul, who he continues to collaborate with today.

Organized by the National Gallery of Canada.

The MAC presentation is organized by Lesley Johnstone, Curator and Head of Exhibitions and Education. 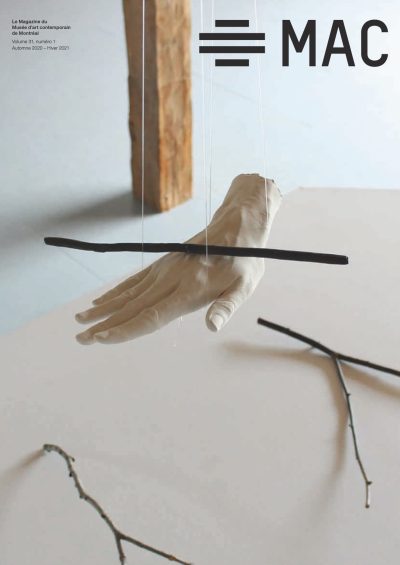 Read (PDF)
Transcription of the work
Curator(s)
Lesley Johnstone
MAC Newsletter Be the first to know about our activities, subscribe to our newsletter