The MAC is presenting the first solo exhibition in Canada by internationally acclaimed artist Olafur Eliasson, who applies scientific principles in order to explore our relationship to time and space.

From Spectator to Participant

A leading figure in the contemporary art scene, Olafur Eliasson has exhibited large-scale installations all over the world, taking over public spaces as well as galleries and museums to interrogate our relationship with the world, the environment, time and space. Since the mid-1990s, in collaboration with his studio in Berlin, he produces devices that engage the mechanisms we use to perceive light and natural phenomena.

By means of spare and immaterial works that investigate the body, movement and the perception of self and the environment, Olafur Eliasson puts the spectator in the centre of his creations. Rather than simply observing the work, spectators discover that their presence completes it and they become active players. In this way, many of his installations guide our attention not only to what we see, but also to the way in which we look, creating what the artist calls situations of “seeing yourself seeing.”

Following the same lines that underlie Eliasson’s practice, this exhibition at the MAC will feature a selection of important works that will enable visitors to appreciate the exceptional process of this unique artist.

[…] Olafur Eliasson has an impressive history of making art that is accessible, genuinely exciting, and involves its public in a truly pleasurable way.

For this first and highly anticipated solo exhibition in Canada, the MAC is pleased to present a concise but significant selection of works, dating from 1993 to the present, that are representative of the artist’s unique practice blending design, engineering and scientific exploration. Born in 1967, Olafur Eliasson grew up in Denmark and Iceland. In 1995, after studies at the Royal Danish Academy of Fine Arts, he moved to Berlin where he founded Studio Olafur Eliasson.

In 2003, Eliasson represented Denmark at the 50th Venice Biennale and presented The Weather Project at the Tate Modern in London, a spectacular installation seen by two million visitors. Take Your Time: Olafur Eliasson, a survey show organized in 2007 by the San Francisco Museum of Modern Art (SFMOMA), toured until 2010 to various venues, including the Museum of Modern Art in New York. In 2014, Contact was the inaugural exhibition at the Fondation Louis Vuitton in Paris. In 2016, Eliasson created a series of interventions for the palace and gardens of Versailles, including an enormous artificial waterfall that cascaded into the Grand Canal.

Eliasson’s projects in public space include the crystal-like facades for the Harpa Concert Hall and Conference Centre in Reykjavik (2011); Cirkelbroen (The circle bridge), Copenhagen, Denmark, 2015; and Ice Watch, for which Eliasson brought melting icebergs from Greenland to Paris on the occasion of the COP21 Climate Conference in 2015.

Together with engineer Frederik Ottesen, Eliasson founded the social business Little Sun in 2012. This global project produces solar lamps and mobile chargers for use in off-grid communities and spreads awareness about the need to expand access to sustainable energy to all. In 2014, Eliasson and long-time collaborator Sebastian Behmann founded an international office for art and architecture, Studio Other Spaces, to focus on interdisciplinary and experimental building projects and works in public space.

A selection of works

The work resulting from Olafur Eliasson’s practice is often, by its very nature, intangible: the play of light, optical illusions, scientific principles and weather elements are key components of his installations. In this exhibition, water and light figure especially prominently.

The exhibition opens and closes with two pieces in which water creates effects of light that in turn evoke opposing time frames: Big Bang Fountain, 2014, , uses a strobe light to transform a jet of water into an ephemeral sculpture, while Beauty, 1993, presents the luminous apparition of a shifting rainbow that appears in a curtain of fine mist falling through a beam of light. The first work produces a fast-moving, apparently endless and constantly changing sequence of momentary compositions, while the second is a continuous but elusive effect that can only be seen when the spectator moves into a certain position.

The exhibition’s central work that lends its title to the exhibition, broadly explores the visitor’s relationship with architecture and light. Multiple Shadow House, 2010, is a free-standing “house” where the walls are screens. On both sides of these walls, the shadows of visitors are cast from different angles, in a range of colors. The installation reproduces the minimalism of the museum space while allowing visitors to see the incidental and ephemeral shadow-play created by other visitors behind seemingly opaque walls.

Your space embracer, 2004, newly acquired by the MAC, explores light in another way by providing an experience where light hitting a suspended ring is indirectly projected onto the walls and ceiling of a room. A little like a magician revealing his secrets, Eliasson here shows the surprising result of an effect of light along with the structure that creates it.

The Musée d’artcontemporain de Montréal (MAC) is a provincially owned corporation funded by the Ministère de la Culture et des Communications du Québec. It receives additional funding from the Department of Canadian Heritage and the Canada Council for the Arts.

The MAC is also sincerely grateful to the Tanya Bonakdar Gallery for its generous loan of artworks and cooperation in the design of this exhibition.

The MAC would also like to thank its partners Loto-Quebec and Ubisoft Montreal, as well as its media partners, La Presse and Publicité Sauvage. 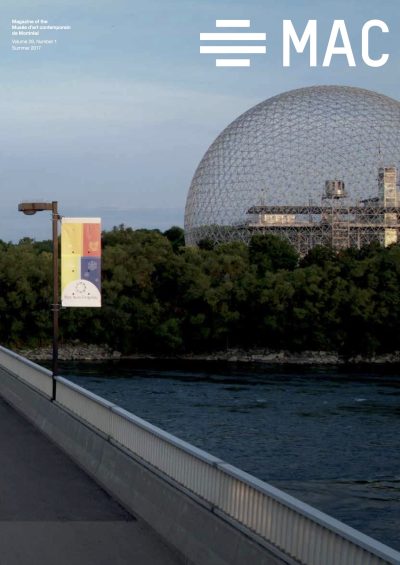