Screening of the MAC’s collections movie

The nine-episode series TimeTraveller™, created by Skawennati between 2007 and 2014, offers a postcolonial rereading of the history of the Indigenous peoples of Turtle Island. The particularity of this work is that it projects Indigenous presence into the future through science fiction.

Starting October 13, the MAC screening room at Place Ville Marie will offer an excellent venue for viewing or revisiting this perpetually relevant work by a prolific artist who is an important ambassador for the Tiohtià:ke art community.

Please note that this screening is offered for free, we invite you to reserve your seats online.

To enhance the screening some books of the Hannenorak Library will be available at the MAC.

The series tells the story of Hunter, a young Mohawk man living in the twenty-second century, who uses an edutainment system imagined by the artist, called TimeTraveller™, to learn about his heritage by ostensibly travelling through time. The work visits moments in history important to Indigenous people, spanning a period of more than six hundred years, from pre-Columbian America to the future in 2121. During Hunter’s visit to the simulation of the Kanehsatà:ke Resistance in 1990, he meets Karahkwenhawi, a little girl who seems to be just another Non Player Character. But in the next episode, she appears as a young woman in the present. She mysteriously gets a pair of TimeTraveller™’s and proceeds to follow Hunter’s trail until they meet again during the occupation of Alcatraz in 1969. When Karahkwenhawi visits Hunter’s time, she discovers an exhibition of Indigenous contemporary art, among which we can recognize works from the MAC collection. 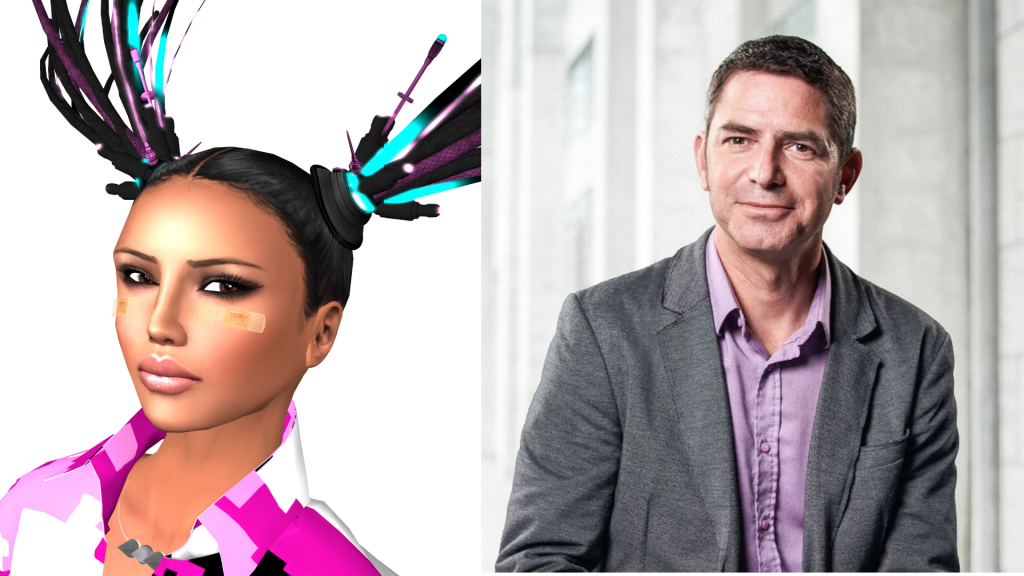 Conversation between Skawennati and Greg Hill

As part of the presentation of the work TimeTraveller™, the MAC invites you to a conversation between the artist Skawennati and Greg Hill, Audain Chair and Senior Curator of Indigenous Art at the National Gallery of Canada.

Skawennati lives and works in Tiohtià:ke/Montréal, and her work circulates internationally. She was born in Kahnawà:ke in Mohawk Territory, and is a member of the Turtle Clan. Concerned with the absence of Indigenous peoples in the collective imagination of the future, over the past thirty years she has developed sculptures and textile and photographic works, as well as network-based projects and machinimas that bring Indigenous presence into cyberspace. Her work is celebrated for her futuristic representations of Indigenous people as she battles against tired stereotypes and highlights today’s vibrant Indigenous cultures.

Skawennati’s community engagement and collaborative approach are remarkable. As a youth, she became active with SAGE (Students Against Global Extermination) and Femmes autochtones du Québec and was a co-founder of Nation to Nation, a collective of First Nations artists. More recently, in 2019, she and artists Nadia Myre, Caroline Monnet, and Hannah Claus created the Indigenous artist-run centre daphne, a presentation and residency venue.

Sensitive to the issues of her times, Skawennati quickly grasped the incredible potential of the Internet. In 1997, in recognition of the need for contemporary Indigenous artists to meet despite being separated by vast geographical distances, she organized, through Nation to Nation, CyberPowWow, a ground breaking online gallery featuring a mixed-reality event which took place roughly every two years until 2004. In 2005, she and Jason Edward Lewis founded Aboriginal Territories in Cyberspace (AbTeC), a research-creation network based at Concordia University, to help ensure that Indigenous people were represented in digital media, as producers as well as subjects.

Skawennati’s occupation of cyberspace at the turn of the millennium demonstrated a new space to collaborate and explore. New art practices proliferated in parallel with the emergence of Indigenous activism, institutional changes, and commissions on the state of Indigenous Peoples. As we witness a true cultural reform, it becomes clear that the popularization of the Internet provided a new vehicle for Skawennati and her peers to create a shared future. TimeTraveller™, through both its subject and its medium, testifies to this context of emancipation.

The word “machinima” is a combination of the words “machine” and “cinema.” It is used to describe a movie made in a virtual environment. The virtual setting that Skawennati has used since 2007 is Second Life, a highly customizable, multi-player, online world. On an island that AbTeC acquired in this space, Skawennati, with the help of a small team, builds sets, personalizes avatars, choreographs their actions, and then shoots scenes, which she later edits.  She engages people from her community to be the voices of the characters and works with musicians and a sound designer to add depth to the worlds she creates.