Montréal, January 26, 2010 — In Etienne Zack’s innovative and vibrant paintings, the viewer’s eye is led every which way over the canvas. Like a modern-day maze, each of his works draws us into a multilayered labyrinth. The Musée d’art contemporain de Montréal presents the exhibition Etienne Zack from February 4 to April 25, 2010.

Etienne Zack was previously featured in The Québec Triennial. Now the Musée has mounted a solo exhibition comprising twenty-two paintings produced over the last six years, including two major new works Formalities and Proceeding to Irrevocability, 2009 created specifically for the show. This is the artist’s first solo museum exhibition.

Zack is one of today’s artists who are truly pushing the envelope in terms of painting concept. His work focuses on the context in which artworks are produced and exhibited, and the physical and conceptual tools that go into creating them: the studio, art gallery, painter’s materials, and historical and theoretical reference works. Architectural objects and motifs merrily accumulate and intersect in rhythmical compositions with multiple vanishing points. The works reveal a process of deconstruction, fragmentation, multiplication and mise en abyme in a rigorously ordered reconstruction.

Both poetic and playful, Zack’s painting prompts us to re-examine the everyday world around us.

Born in Montréal in 1976, Etienne Zack attended Concordia University before moving on to Vancouver, where he studied at the Emily Carr Institute of Art Design. In addition to The Québec Triennial in 2008, his recent exhibitions include East International at the Norwich Gallery in Britain in 2004, Paint at the Vancouver Art Gallery in 2006-2007 and According to This at the Bergen Kunsthall in Norway in 2006. He won the 2005 RBC Canadian Painting Competition and was awarded the Prix Pierre-Ayot in 2008. Zack lives and works in Montréal, and is represented by the Equinox Gallery in Vancouver and Art 45 in Montréal.

The exhibition was organized by François LeTourneux, Associate Curator at the Musée. It is accompanied by a bilingual, 88-page catalogue. The publication contains essays by François LeTourneux and Séamus Kealy, Director/Curator of the Model Art and Niland Gallery, Sligo, Ireland, a list of works, a biobibliography and numerous colour reproductions. The Musée wishes to thank the RBC Foundation and Equinox Gallery for the support they provided, as well as the City of Montréal and the Association des galeries d’art contemporain (AGAC), in conjunction with the 2008 Prix Pierre-Ayot. The catalogue may be purchased for $29.95 at the museum’s Boutique or from your local bookseller.

Meet the artists and curators

On Thursday, February 4 at 4 p.m., the public is invited to share in a discussion between curators Lesley Johnstone, Mark Lanctôt and François LeTourneux, and artists Marcel Dzama, Luanne Martineau and Etienne Zack, about common threads that run through their respective bodies of work. The meeting will take place in English, with a bilingual question period to follow. Length: 90 minutes. In the Atrium. Free admission.

The Musée d’art contemporain is a provincially owned corporation funded by the Ministère de la Culture, des Communications et de la Condition féminine du Québec. It receives additional funding from the Department of Canadian Heritage and the Canada Council for the Arts. 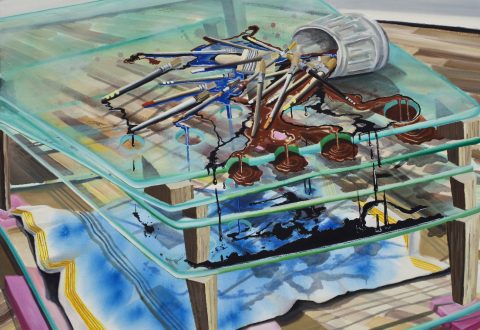