Two Major Works To Be Unveiled

Montréal, October 2, 2014 — This coming October 8 at 6:30 p.m., the public is invited to the unveiling, in the Quartier des Spectacles, of two large-scale projections that deal with contemporary realities. To start things off, on the plaza of Place des Arts, artist Krzysztof Wodiczko gives Montréal’s homeless people a voice, on the façade of Théâtre Maisonneuve, with Homeless Projection: Place des Arts. Later the same evening, next to Saint-Laurent metro station, the public will also be able to view a new work by Isabelle Hayeur, titled Murs aveugles, which takes its inspiration from the Occupy peaceful protest movement and which presents a portrait of our current political landscape. Homeless Projection is the product of a joint undertaking made possible through the combined efforts of La Biennale de Montréal, the Musée d’art contemporain de Montréal, Quartier des Spectacles Partnership, Centre Phi and St. Michael’s Mission.

Titled L’avenir (looking forward), BNLMTL 2014 provides a framework for examining the present state of the world from various perspectives, including geopolitics, the environment, technology, science and society. Produced specifically for this edition of the Biennale, the projections by Wodiczko and Hayeur thrust us into two different yet equally relevant situations that provoke thought and spark increased awareness.

Krzysztof Wodiczko gives life to public buildings and monuments with projections that bring to light the images and words of marginalized citizens. Homeless Projection: Place des Arts is a new work in which the bodies and voices of the homeless who frequent Montréal’s downtown populate-on various levels-the outside surface of Théâtre Maisonneuve.

Working closely with St. Michael’s Mission and other community organizations, Wodiczko offered the homeless a space to recount their life experiences and express their fears and desires, thus providing a more intimate portrait of homelessness. Projecting these stories onto the façade of a theatre means that the participants become both spectators of official culture and actors playing in their own theatre, following their own lived script. The changing face of cities, increasingly given over to commercial interests and the privatization of public space, impacts heavily on marginalized populations living in the downtown core; by giving voice to those who are visible but not always heard, Wodiczko opens up a democratic space for social speech.

Krzysztof Wodiczko lives and works in New York, Boston and Warsaw. He has created more than eighty public projections in Germany, England, Australia, Austria, Canada, Spain, the United States, Northern Ireland, Israel, Italy, Japan, Mexico, Netherlands, Poland and Switzerland. He has also designed and produced various “nomad” vehicles and instruments, with the collaboration of homeless people, immigrants and war veterans who use them to survive and to communicate. Wodiczko was awarded the Hiroshima Art Prize in 1998 for his contribution, as an international artist, to world peace, and he has represented Canada and Poland at the Venice Biennale. He is Professor in Residence of Art, Design and the Public Domain at the Harvard Graduate School of Design.

In the wake of the Occupy international social protest movement, large numbers of citizens gathered in Square Victoria from October 15 to November 25, 2011 and set up camp there as Occupons Montréal. The artist Isabelle Hayeur visited this “people’s square” regularly, photographing the protestors, their tents and their posters. She also listened to the public statements and took inspiration from the energy of this place and time, which held out the hope of a fairer, more mutually supportive world.

Murs aveugles is an architectural video projection shown on the wall of a building next to Saint-Laurent metro station. Offering a portrait of our current political landscape, the projection takes the form of a playful, brightly coloured mosaic made up of graffiti, slogans, symbols and quotations superimposed on one another in a slow dissolve. Issues touched on relate to gentrification, social inequality, media convergence and disregard for the environment.

In her large-scale photographic montages, videos and site-specific installations, Isabelle Hayeur focuses on the aberrations of urbanization, urban sprawl and industrialization. She does this using digital imaging technologies to assemble new landscapes from images she has shot. Hayeur has participated in various public presentations, at the National Gallery of Canada, Musée d’art contemporain de Montréal, Massachusetts Museum of Contemporary Art (MASS MoCA), Neuer Berliner Kunstverein in Berlin, Tampa Museum of Art and Akbank Sanat in Istanbul, among others. In 2006, the Musée national des beaux-arts du Québec and Oakville Galleries organized her first retrospective exhibition, which toured Ontario, Nova Scotia, Québec and Alberta. That same year, Hayeur took part in the Arles Rencontres internationales de la photographie. Her work may be found in a number of collections in Canada, France and the United States.

Murs aveugles was produced with support from La Biennale de Montréal for BNLMTL 2014.

As part of BNLMTL 2014, Isabelle Hayeur is also presenting two recent photographic pieces and a video at the Musée d’art contemporain de Montréal. Shot in Louisiana, the video illustrates the environmental and economic repercussions of Hurricane Katrina.

Presentation of the works

Both works will presented in the Quartier des Spectacles from October 8 to November 23, Wednesday through Sunday, starting at nightfall.

BNLMTL 2014 is a co-production of La Biennale de Montréal and the Musée d’art contemporain de Montréal. 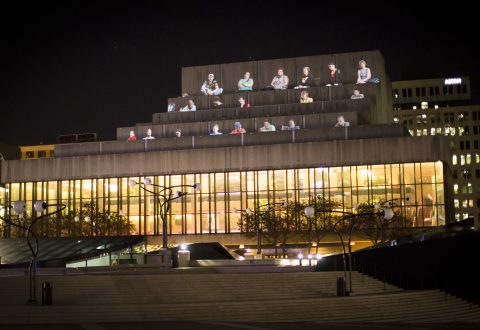 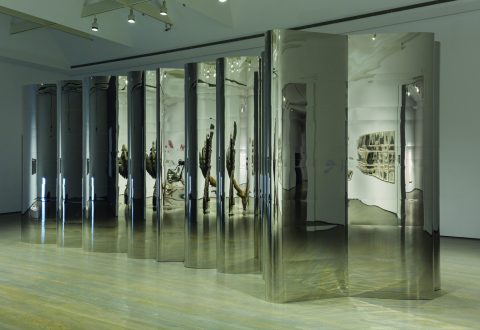