The Clock at the MAC: Only two weeks left!

Exhibition organized by the National Gallery of Canada

Montréal, April 7, 2014 — Time is certainly flying by: there are only two weeks left for you to enjoy The Clock, Christian Marclay’s video masterpiece screening at the Musée d’art contemporain de Montréal (MAC) until this coming Sunday, April 20.

Just like other cities around the world that have presented this work—London, New York, Venice, Seoul—Montréal welcomed The Clock warmly and with eager anticipation. This unique video piece, winner of the top prize at the 2011 Venice Biennale, has also garnered great critical praise. In his blog, the critic Claude Deschênes calls it “the most brilliant video work I’ve ever seen,” while Odile Tremblay, writing in Le Devoir, described the experience of The Clock as “an invitation to follow the Alice in Wonderland rushing rabbit, who checks his watch and and leads you down a magic rabbit-hole.” An extravaganza of images and sound, The Clock is a remarkable, unique cultural experience – not to be missed!

Brilliantly edited by Marclay himself, the video is a montage of thousands of film and television clips from every era, demarcating, minute by minute, a 24-hour loop that audiences are invited to watch and listen to. The work unifies these disparate elements into a coherent visual whole that unfolds in real time, functioning as an actual clock that tells viewers the precise time of day.

The Musée d’art contemporain de Montréal is a provincially owned corporation funded by the Ministère de la Culture et des Communications du Québec. It receives additional funding from the Department of Canadian Heritage and the Canada Council for the Arts. The museum gratefully acknowledges their support and that of Collection Loto-Québec, the MAC’s principal partner. The MAC also thanks its media partner, La Presse+. 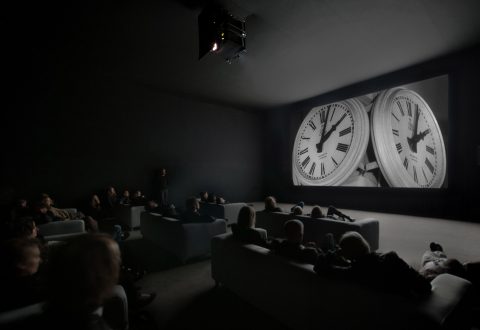